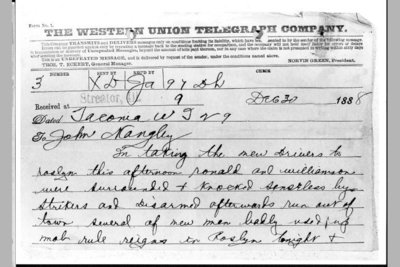 Telegram sent from Tacoma, Washington Territory on December 30, 1888 to John Kangley of Streator, Illinois: "In taking the new drivers to Roslyn this afternoon Ronald and Williamson were surrounded and knocked senseless by strikers and disarmed. Afterwards run out of town. Several of new men badly used up. Mob rule reigns in Roslyn tonight and..." Alexander Ronald was Superintendent of the Northwestern Improvement Company (N.W.I.) in the 1880's and for whom the town of Ronald was named.