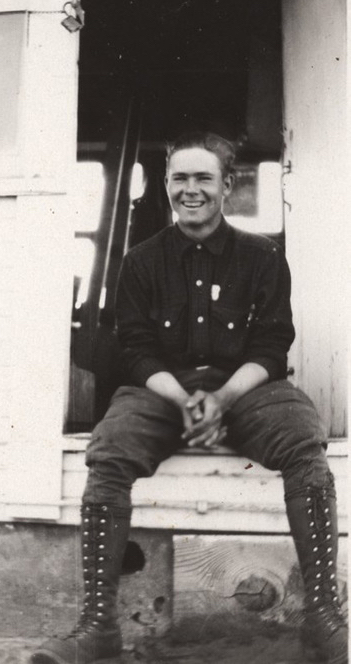 Morris Byron Jenkins was born on a ranch in the Cow Creek drainage near Lucile, Idaho on October 17, 1908, and he attended the Cow Creek School from 1915 to 1919. Jenkins was one of nine children. His father, Byron, died due to appendicitis in 1918, and his mother, Mary Anna, moved the family to Grangeville, Idaho, in 1919. When Jenkins’ mother remarried in 1920, the probate judge placed five of the children in a state-run orphanage because the home of Jenkins’ stepfather was too small. Jenkins lived at the North Idaho Children’s Home in Lewiston, Idaho, until 1921 when he was placed with the Zarnow family near Bonner, Idaho, where he remained until his graduation in 1927.

Jenkins attended one quarter of school at the Lewiston State Normal School before returning to work at fur trapping in Grangeville, Idaho. In 1929 he relocated to Cle Elum, Washington, where he worked at fur trapping in the winter and building roads in the summer. In 1930 he began work for the US Forest Service as a patrol ranger in the Easton area and returned to trapping in Idaho in the winter. In 1932 he married Sue Griner in Idaho. He continued to work for the USFS until 1943, when he started work for the Northern Pacific Land Development Company for the Northern Pacific Railroad. He retired as a District Forest Manager for Northern Pacific after thirty years.

Jenkins had two sons with Sue Griner: Adrian and Allan. After Sue died in 1981, Jenkins remained in Cle Elum, where he remarried to his second wife, Clara, in 1983. Jenkins maintained an active schedule of involvement in service and community organizations until his death on April 6, 2007.

This collection includes digitized 8mm home movies and interviews done with Jenkins by the Mountains to Sound Greenway Trust.