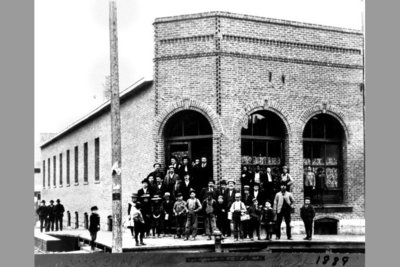 In this turn of the century photograph, a group of men, boys and three little girls stand in front of The Brick Saloon situated on the corner of Pennsylvania Avenue and North First Street in Roslyn, Washington. It is claimed that The Brick is the oldest operating saloon in Washington State. It was built in 1898-1899 by Peter Giovanini, who also served two terms as Roslyn's mayor. Forty-five thousand Roslyn-made red bricks were required for the construction of the saloon. The Brick has a large, magnificent bar from England that was purchased in Portland, Oregon after being shipped around Cape Horn.