Pack train from Roslyn to Copper Mine at Glacier Park 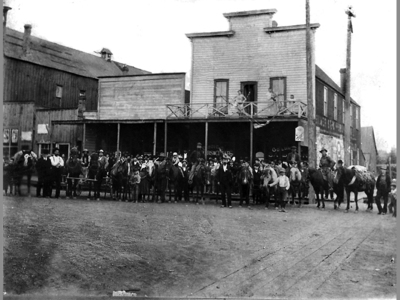 Christopher Meneghel, owner of the Columbia Saloon in Roslyn in the 1890s, began the Glacier Park Mining Company. This Newman Studios photograph taken in front of Meneghel's saloon was given to company investors showing a pack train and workers outfitted for a trip to the copper mines in North Central Washington. Three of the four girls on the balcony were Chris Meneghel's daughters; the baby is Elizabeth. The man on the horse on the right is George Meneghel, Chris's stepson. A quote from Tales of a Western Mountaineer by Claude Ewing Rusk mentions meeting the Glacier Peak Miner. in 1906: " We crossed Cloudy Pass, taking the left hand trail. This led us by devious ups and downs eventually to a mountain-side where a party of hostitable miners were engaged in developing a mine. Dinner was ready and they invited us to their table. The outstanding feature of the the meal was 'mulligan' or mixed stew, the principal ingredient being deliciously cooked mutton." During the mid 1960s, Elizabeth Meneghel Sample acting president of the Glacier Peak Mining Company sold the company to the Kennicott Copper Corporation.